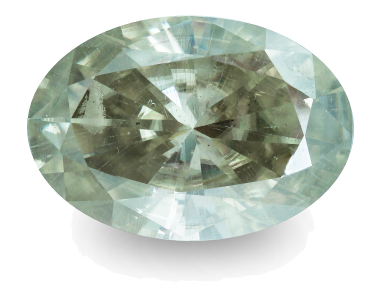 Moissanite is a natural mineral discovered by Henri Moissan (Ferdinand Frederic Henri Moissan, 1852-1907) in meteorite samples collected in the Devil Canyon meteorite crater (Canyon Diablo, Arizona, USA). Crystals of naturally occurring silicon carbide along with other minerals from meteorite material were discovered by Henri Moissant in 1904 in the periodical edition of the French Academy of Sciences (Comptes rendus hebdomadaires des séances de l'Académie des sciences). In 1905, on the initiative of George Frederick Kunz (George Frederick Kunz, 1856-1932), the mineral was given the name "moissanite" in honor of the discoverer of this natural mineral (artificially silicon carbide has been known since 1849) and in recognition of his achievements in studying natural carbides.
For the first time in rocks of terrestrial origin, moissanite was discovered in 1958 in low-temperature cubic polymorphic modification (β-SiC) in sandy shale deposits of the Green River Formation (Wyoming, USA). Later, in 1959, it was also found among the minerals of kimberlite rocks (Yakutia, USSR) in the form of a hexagonal polymorph (α-SiC).
The method of obtaining an artificial analogue of moissanite, called carborundum, was patented in 1893 by the American chemist Edward Acheson (Edward Goodrich Acheson, 1856-1931).
Natural moissanite is a dark (to black), almost opaque due to the large number of inclusions of grain and crystals. Thus, all inserts made of silicon carbide used in jewelry and called “moissanite” are in fact “carborundum” (in accordance with the Acheson patent), and in the case of using the term “moissanite” it is necessary to use the definition of synthetic. 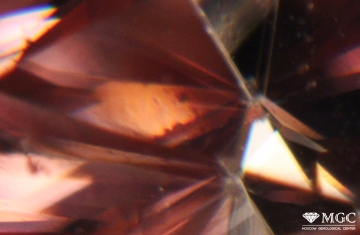 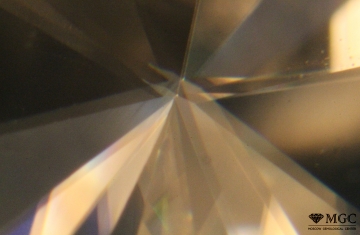 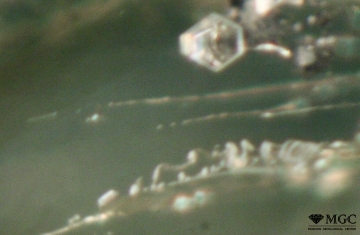 The inclusion of the type of reverse crystal and two-phase inclusions in synthetic moissanite. View mode - dark field lighting

In the manufacture of jewelry used synthetic silicon carbide. 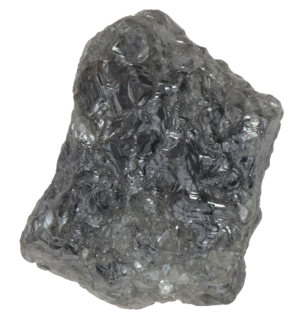